Elkton, Minn. is one of those small towns in America where almost nothing ever happens. You wouldn’t know that nothing happens, because you’d probably never even know that Elkton, Minn. even exists. That’s because Elkton has a population of only 149 packed into a total area of 1.31 square miles. But once a year, for the past eight years, all that changes. That’s when Fred Engelhart puts on his car show.

his is Harry Holton’s original car. It was never cut. Mickey Weise raced it, but didn’t own it for all the years it was reported to be in his possession. Mickey sold the car to another racer, and at one point, some parts got stolen off it. The car then went up to Washington, where the owner redid the paint scheme back to the Mickey Weise lettering. Years later, Mickey bought the car back at auction, and eventually sold it to its current owner. Mickey, however, called us on 21 Nov. 2006, quite agitated, to say that this information is all wrong, so, who knows? 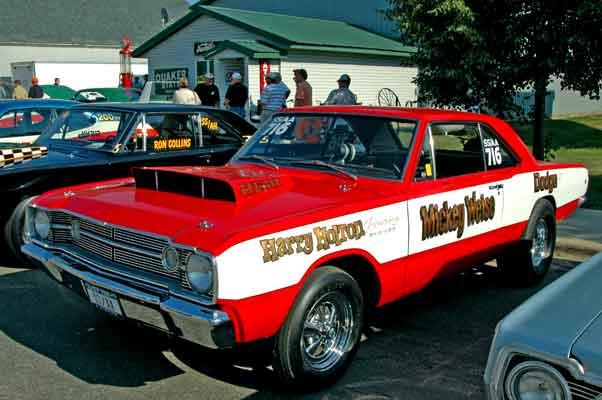 Fred’s shindig didn’t start out as a car show, though. You see, Fred buys and sells cars, but not your ordinary cars. He doesn’t deal in stuff like 1991 Dodge Dynasties, or Honda Accords. Fred specializes in race cars, Super Stocks, cars with a pedigree. Cars raced by the likes of a Ronnie Sox. Fred has a cadre of regular customers. He marks up his cars for a fair profit, so his customers keep coming back.

Two Hemi Darts with consecutive VINs. Both cars are out of Canada. The white one belongs to Dave McDade, from Canada, the other, Jack Thomas’ old car, now belongs to Dick Towers. Both owners drive their Hemi Darts on the street.

“Psychotic Reaction,” has never been tubbed, and it still wears its original psychedelic paint scheme from 1968. It is very original and was raced only a few times. Bobby Harrup was a partner in the original deal, and he drove the car down the track a couple of times. The partnership then dissolved, and the car sat until the 1980s. Jim Kramer is the current owner. As Jim was getting the car ready for the show, he found the original Certicard above the glovebox.

Fred’s idea was to give back something to the car guys who have given him business all these years, so he came up with the idea of a “customer appreciation day.” Fred invites his customers for a 2-day get-together, picks up their hotel tab, puts on a feed, and everyone has a good time. There’s no formality, no schedule. It’s a laid back deal. And another thing. Fred doesn’t advertise this event. It’s like his own personal “open house.” 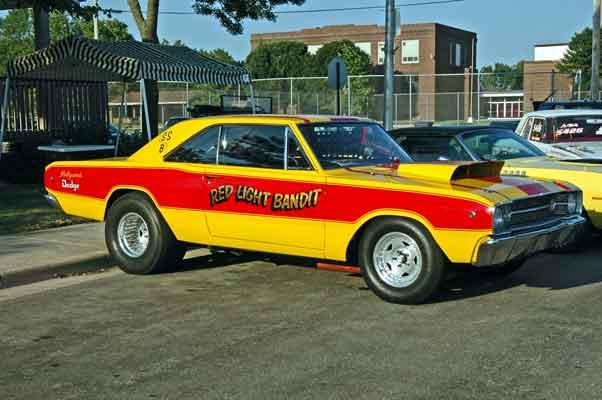 Bill Bagshaw’s “Red Light Bandit” Dart is one of the original 1968 Hurst built cars that he raced in S/S in ‘68-’69, and Pro Stock in early 1970. The car was then sold to Jim & Walt Marshall in California, who raced the car in M/P. DeFrank & Cohen then raced it in S/S. It probably was the first ’68 super Stocker that they campaigned. Donny Chapman did some resto work on the car, and it is now owned by Gene Mosbek.

The first appreciation day pulled some 75 cars. This year, 526 cars showed up. All without any advertising, except word of mouth. While primarily a Mopar show, guests can bring anything they like. So this year, in addition to race race, there were musclecars, street rods, classics, and even a jet car that lit up and really rattled some windows.

One of the largest collection of Sox & Martin cars in one place at any one time. 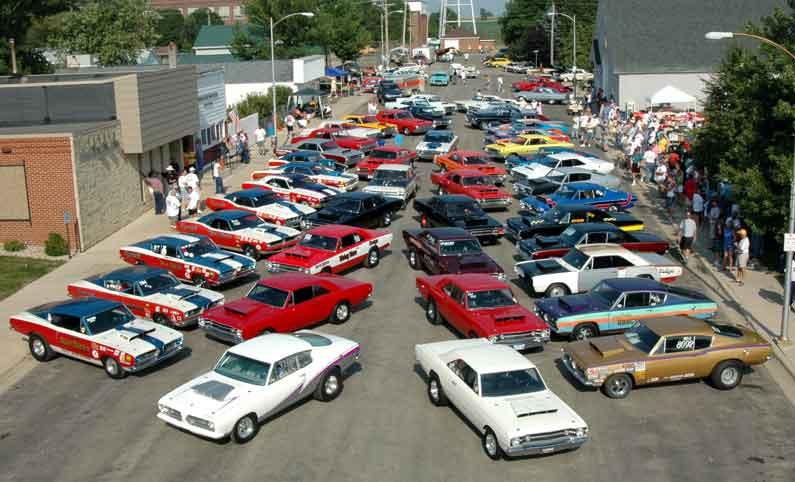 As far as Super Stockers go, last year about 13 showed up. This year, Fred says he expected about 20. But that was before guys like Dick Towers, Jim Kramer and Mark Janaky started talking things up to put together a ’68 super stock reunion. As a result, 40 trailers pulled into Elkton, each packing a 1968 Super Stock Dart or Barracuda. And it wasn’t only the cars. About a dozen racers from the golden age of Super Stocks showed up. Included in the quarter-mile who’s who, were the likes of Dick Landy, Arlen Vanke, Judy Lilly, Don Grotheer, Gary Ostrich, Jim Wick, Larry Griffith, Charlie Rogers and Dick Oldfield.

Shirley Shahan was the original owner of this ’70 Hemi Dart. Bob Jenkins, who was hooked up with Harry Holton, ran it to about 1973. The Dart also was campaigned by Bruce Larson, and Richie Zul, out of Amityville, Chevrolet. The car also was sponsored by Baldwin-Motion in M/P. Danny Smith owns it now.

One of Eddie Smith’s old cars, “West Virginia Hemi,” this ’68 Barracuda originally was bought by Bob Porter, in Ohio, where it was called “Porter’s Pride.” Porter also owned a ’64 or ‘65 car that was beat up in a tornado that destroyed his house and garage. The ’68 survived virtually unscathed. Porter obviously needed money, so he sold the ‘Cuda to Eddie Smith, who painted it red and black, and raced it extensively. The car was then bought and raced by Richard Beshore, who turned it into the show car you see here. This ‘Cuda won the Hemi Shootout at Indy a couple of years ago. 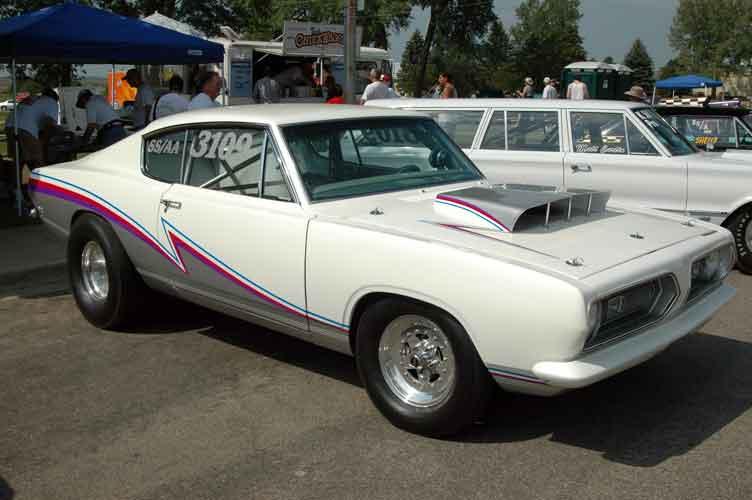 But it was the cars that were the stars. 1968 Super Stockers lining Main Street from end to end. An amazing collection of Sox & Martin cars—three ‘68s, one ’67, a ‘70, ’71 and ’73, and a Colt—all real. What was really neat, was the reunion of some of the racers and their old cars, cars they didn’t know ahead of time would be there. Dick Towers’ Dart definitely brought back memories for its original owner, Jack Thomas. Jim Wick saw his Barracuda for the first time since he sold it in 1971. He rolled up next to the car and wouldn’t move. 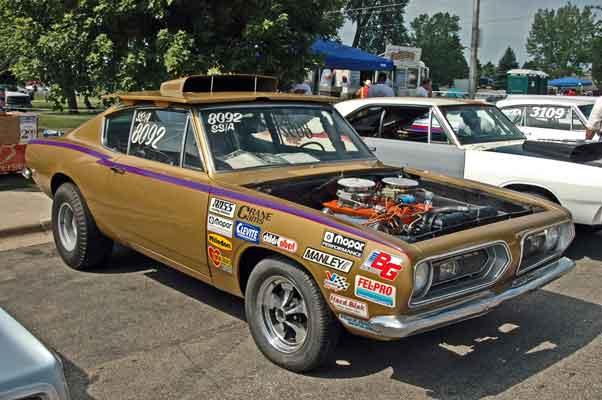 Don Grotheer’s old Barracuda that took Don to a ’69 Winternats win. This was the first car to use a J-converter, and Don raced it up until early 1970. Dick Thompson also raced the ‘Cuda in Colorado, and Jim Hale owned the car a couple of times. A guy in PA bought the car in the ‘70s so he could take out the windows and put them in his own ‘stocker. Ken Hensley (Hensley Racing) ended up buying the car, and owned it for many years. Chuck Smith owns it now.

‘Course, these cars have been elevated from mere “race car,” to “highly collectible.” While some owners are in it just for the investment potential, they are in the minority. Most in this specialized niche of the hobby are real car guys—either racers, or racing enthusiasts. To them, they are the keepers (and preservers) of a special piece of automotive history.

Originally out of Idaho, this Barracuda was called “Gentle Ben,” and had a one page write-up in either Hot Rod or Car Craft. DeFrank and Cohen raced it at one point, and Harry Holton set a record with it. Fred Engelhart owns the car now. 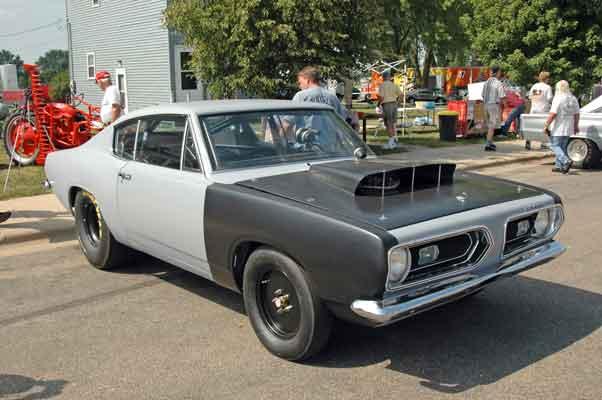 So what’s a ’68 Super Stocker worth today? Condition is the most important factor in the equation. If the car is junk, it’s junk—no matter who drove it. So figure what the price of scrap iron is as a starting point. The second factor is history. Who drove the car and what did it do? At the top of the list are Ronnie Sox and Dick Landy. Everyone else (in terms of a car’s collector value) is an also-ran. Super Stocks recently have changed hands in the $400,000 range, and we know one collector who refused a firm offer of 850 grand. Fred Engelhart sold this particular car to the collector back in 2000 for $62,000. And, other than waxing it and taking it to a few shows, the guy as done nothing. He just thinks his ‘stocker is a neat car to own. Hey man they’re all neat! 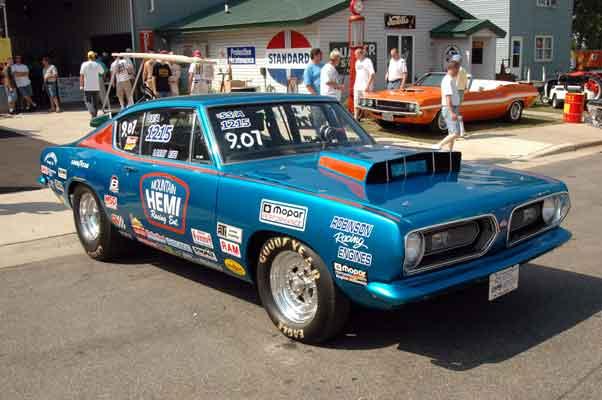 This ‘Cuda was one car that changed hands over the weekend. The ‘Cuda originally was raced by Robert Nance–an original factory Super Stock racer out of Georgia, who had the car lettered as “Mr. Plymouth.” Nance enjoyed a full sponsorship. Larrt Rife also owned this car as did Fred Englelhart.

Dick Oldfield was reunited with his old Hemi Dart that he campaigned pretty intensely from 1968-’69. The car is now owned by Ray Drake who bracket races it up in Minnesota. 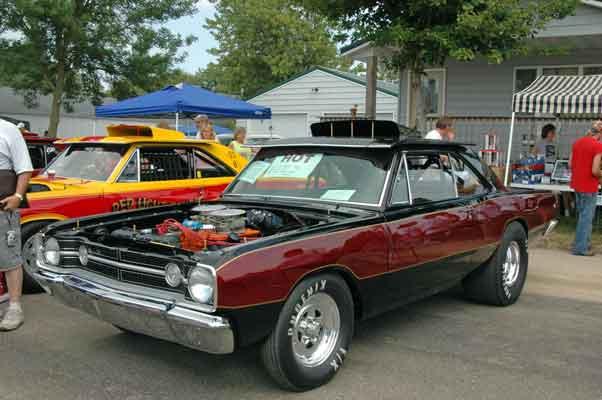 Bob Lambeck’s old car ran car that ran in Pro Stock, and M/P by Dean Tate in California for a couple of years. The car also was owned and raced by Fred Engelhart. It now belongs to Darrin Rumple. 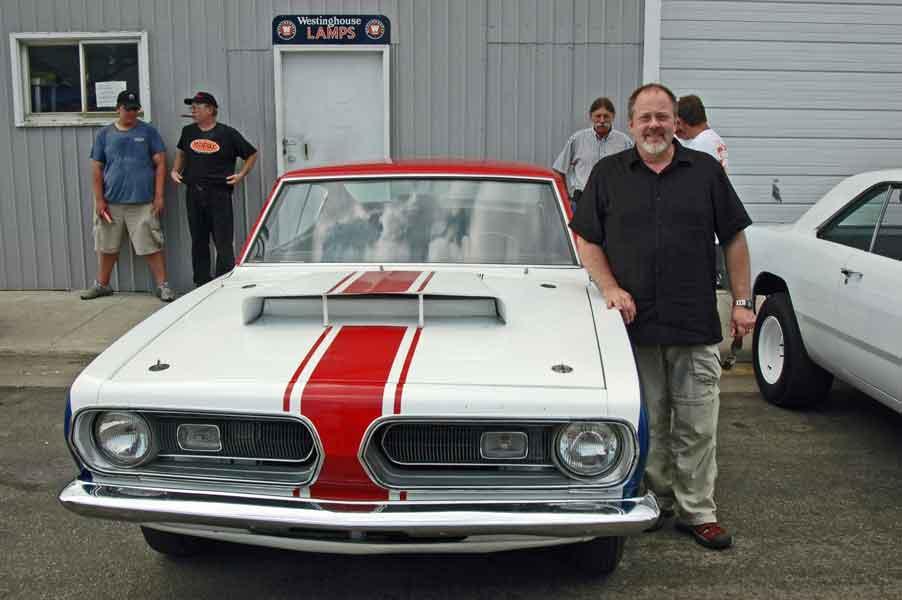 This is one of those “Haul in he Family” stories. Randy Stewart stands by his Dad’s, (Gordon) Barracuda. Gordon, out of Sioux City, SD was the original owner, and called the car the “Hair Bender,” as he operated a beauty school. The car was raced by Dick Hanson for many years, and was very successful in the area.

Arlen Vanke trotted out one of about five Hemi single-4-barrel manifolds he had made to work with the Holley 1150 carb in AHRA GT-1 competition for 1970. This manifold allowed the Hemis to decimate the Chevys in the class. 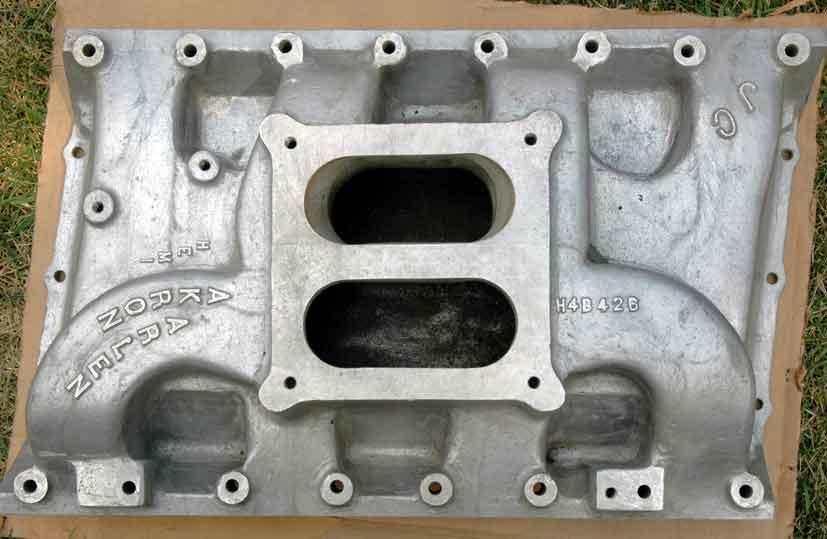