Check Back For Daily Blog Updates

There is nothing like an American Road Trip! In my 40 years of drag racing, I have taken countless ones across country from Seattle towing a race car. But, I longed to be able to take a road trip where I didn’t have a race schedule deadline to make, or where I could stop whenever I wanted to get a real feel for the country that I was crossing. In addition, I dreamed of making the trip in a performance car that I modified myself that had classic Mopar styling, musclecar power with modern handling characteristics, as well as comfort, cargo space, and reasonable gas mileage. The West, Midwest and parts of the South, and Route 66 through Texas and the Southwest were parts of the country that we (my wife Vicki and I) thought would make the most interesting trip for its scenery, history, and highway challenges. Cities, towns, and historical areas like: Butte, Billings, Custer, Deadwood, Mt. Rushmore, Cando, St. Paul, Madison, Springfield, St. Louis, Jackson, Memphis, New Orleans, Houston, Route 66, San Antonio, Amarillo, Albuquerque, Kingston, Barstow, San Bernardino……..teased our romantic imaginings of rich history and events. The car I chose to drive was a 1973 Plymouth Road Runner (cloned from a Sebring). 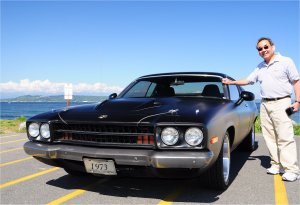 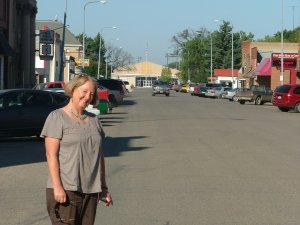 Al Young: Retired from teaching high school after 37 years of service (23 years of those where as an Auto Shop instructor). Drag Raced (bracket racing) during the summers for over 40 years (and still run in the Sportsman Class – second in points as Bremerton Raceways when I left for this trip).

Vicki Young, my wife of 32 years. Just retired from teaching elementary school after 28 years of service. Mother our two children, and a grandmother of 5. Interests are gardening and physical fitness, and volunteer work with senior citizens.

To get a condensed version of my racing history, google: Al Young Drag Racing MOHAI

But here goes a bit of it:

From 1976 to 2002 I raced my 1970 Dodge Challenger RT (in various forms from stock to finally a full tube chassis) keeping the same paint scheme and general outward appearance – earning the reputation as being the “Most famous drag race car in the Pacific Northwest. It has won every major event in the Northwest at least twice, and has won at least won event per year in its near 30 year history.

The chassis work list can be seen as a “whos who” of NW fabricators: Art Morrison, Al Swindahl, Al Book, Brad Hadman

The car was donated to the Museum of History and Industry in 2008 and was in their front lobby for over a year – in front of Boeings first airplane (built in 1917) and the famed “Slo-Mo-Shun” hydroplane, It is in storage now and awaits placement in MOHAI new 100 million dollar facility in November of 2012. The car has been professionally appraised (at the insistence of the Museum) at $600,000.

I presently have come back to racing, but driving in a much slower class (NHRA ET Sportsman), and have campaigned a 1968 Plymouth Satellite (383 crank/400 block) that runs 12.20’s on 100 shot nitrous and 13.20’s without. Since 2006, I’ve kept up with about 20 races per year and winning enough to just about cover the expenses. BUT, I refuse to tow anymore, and all of the cars that I race and drive are driven to the track and raced without even have a wing nut removed. I just empty the truck of my lawn chairs turn on the nitrous bottles, race, and enjoy!

1973 Satellite Sebring that I bought 10 years ago for $600. One big dent with a tattered vinyl top. Repaired one panel per year along with replacing each door. Removed tired 318 and replaced it with an original 1972 318 that had been stored with 20,000 miles on it. Had DG machine install some 2.02/1.60 valves and shave .020 off the surfaces. Used a Comp Cams .440 lift cam and lifters. Holley 650 sits on an Edelbrock Performer, exhaust is through 360 police type cast iron manifolds joining up with a Flowmaster system that they designed for me that incorporated the largest muffler they had (used 2 1/2″ tubing front to rear).

The rear is suspended by a re-arched set of Satellite Station wagon springs, sandwiched between new urethane pads.

The shocks are KYB all around and all of the original rubber body/frame insulators have been replaced with new urethane. 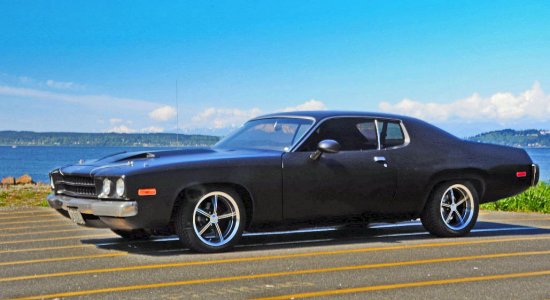 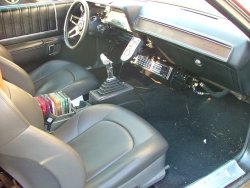 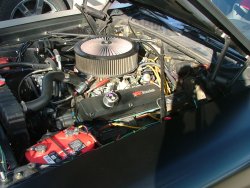 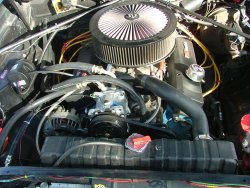 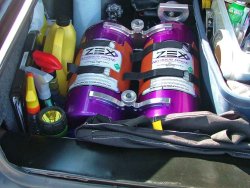 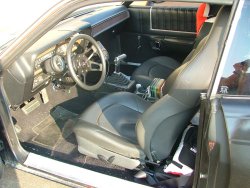 We’re both recently retired and I recalled all of the road trips we took towing a race car and trailer behind our motorhome – struggling with lack of power and subject to side winds, head winds, winding roads, and 55 mph – not able to enjoy the countryside, concentrating on just getting to the next national event. Done that!!! This time we’re going to travel at our leisure totally enjoy the driving experience in a musclecar era car, and stop at the “roadside attractions” that we used to be too much in a hurry to enjoy.

Our original goal was to drive the parts of Route 66 that were still assessable, but then we started adding Historic Deadwood, SD, Mt. Rushmore, Chief Crazy Horse Memorial, the sacred Black Hills, my wife’s father’s hometown in Cando, ND, Minneapolis/St. Paul, Madison, WS, St. Louis, MO, Memphis, TN, New Orleans, Houston, TX, San Antonio, Amarillo, TX, then Route 66 all the way to LA, San Francisco, and then back to the Northwest.