After a five-year, self-imposed exile, Team Mopar Action will be back in action in the 2002 running of the Car and Driver Magazine One Lap of America. For those of you whove been under a rock, this flog is run by C&Ds Brock Yates of Cannonball Run fame. This year, its a 5,500-mile 8-day flog with no less than 18 track events – everything from Road-course races, to bracket drags, E.T. drags, and even a dirt oval. And, as an equalizer, youve gotta run the whole even on the same set of street tires! Other than that, the only rules is: There are no rules. Anything goes!

Well be entering the tried-and-proven Green Brick, a dead-stock (okay, pretty stock) 69 Plymouth Valiant, with a Barton-built stroker 340, Accel SMPI, and one of Keislers 5-speed conversions. When we last ran, in 1997, we made a shot heard round the world – posting a radar- clocked 163-MPH (uphill!) second-overall time at the NASCAR road course at Watkins Glen, NY – beating everything from the factorys own Vipers, to Mallets killer tuner C-5 Vette and Lingenfelters Firebird, as well as a slew of expensive Euro and Jap machinery. The only thing that beat us – by 3/4-sec per lap – was the 2000-lb, carbon-fiber-chassis Mosler Raptor We dont feel bad about that! The competition will be even tougher this year, but Barton has promised us extra HP, with some head work and a new top-secret Comp Cams bumpstick slipped in the freshened mill. And, paying tribute to DaimlerChryslers new Euro-tech lineage, weve really gone all-out to improve the Bricks aerodynamics: We added new German-engineered wiper blades with airflow slots in them! 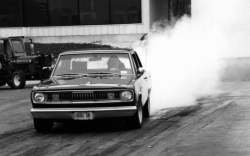 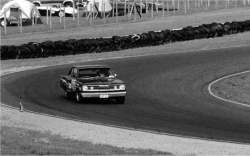 The team will be a re-creation of 1997: Your Tech Editor, E-Booger hisself, as Crew Chief and head radar trap evader, 1999 overall winner Kevin Wesley will do the on-track chauffeuring, and Rocket Scientist (really!) Mark Grubelich will compute how to get another 200 nitrous-assisted HP out of the Brick without kicking Bartons con rods out the side of the block.

Mopar Action readers are invited to stop by as many events as possible and hang out with us, although well be pretty harried from the competitive pressure and sleep depravation, so dont expect us to be razor sharp. Bringing us fresh fruit, cold water and drinks, and, especially, young women of questionable moral turpitude, would be appreciated. (Tall, skin-and-bones, semi-skanky brunettes are Ehrenbergs first choice, Kev likes mega-hooters, and Grubby….well, lets just say: any port in a storm…). The event starts in Rochester, NY (Sheraton Four Points Hotel) on May 3rd and finishes in the same place on May 11th. For the exact schedule, see www.onelapofamerica.com, then click on One Lap 2002″, then Schedule.