Article Extra – Variations on a Theme

Variations on a theme 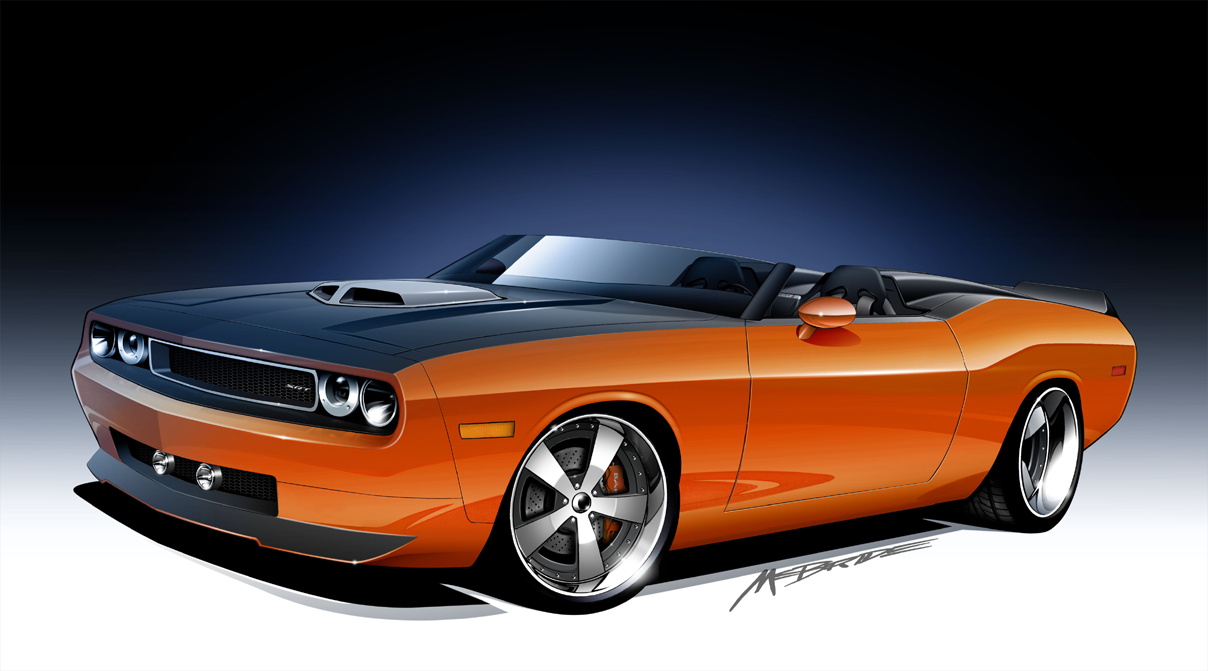 The idea of cutting the windshield and roof off of a brand new SRT8 Challenger sounded crazy at first. When I first mentioned the idea to Chris he liked the idea but wasn’t sure how it’d look. So I thought about it and played around with some 2006 ChallengerConcept car images in photoshop by cutting off the roof and chopping the windshield. The idea for this originally came to me when Ithought of a really cool and unique Dodge concept car called theSuper Charger. I actually got to ride around in this car for a couplehours. At the, the design director I worked for at The Franklin minthappened to own this beautiful unrestored show car. Before he sold itI got to go for a ride. That car got more looks and most peopledidn’t even know what it was. That car was most of theinspiration for the SRT8 Challenger Roadster. Chris and I decided immediately that this car had to be radical. We knew that the competition would be tough if we were going to try and get sponsoredby Chrysler with a brand new Challenger.

The SRT8 Roadster plays off of the Mopar show cars of the 60’s andearly 70’s but with the style and flavor of a modern Moparmuscle car for today. To be a true roadster, this Challenger won’thave a roof. It’s not a convertible; it’s a roadster. Theroof is replaced with a custom molded composite tonneau cover thatstarts behind the front seats and ends at the front of the trunk lid.The 2-seat roadster is cool but what if you got more than just onebuddy you wanna go cruising with? No problem. The tonneau cover canbe removed and replaced with a shorter tonneau cover that exposes the2 rear factory seats.

The chopped down custom roadster windscreen is one of the details about this car that make it truly wicked. It gives the car that dangerousliving on the edge look. The windscreen will be molded carbonate witha custom rear view mirror that will have a molded in clean look atthe top of the windscreen. 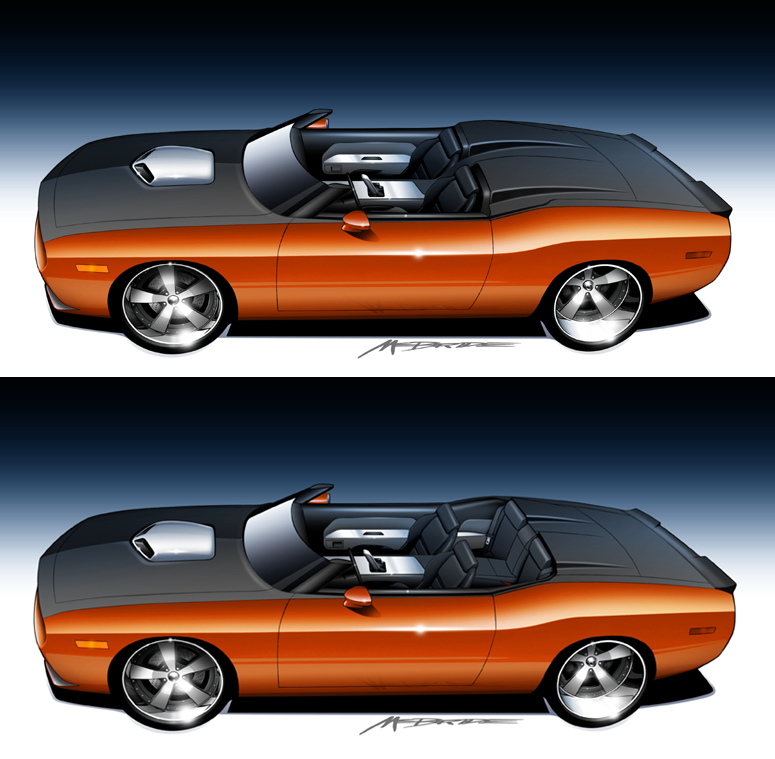 Thefront bumper cover is restyled to give the Challenger roadster asuper clean, and more aggressive hot rod look. Only the lowersection of the bumper cover has been modified to maintain the looksof a Dodge Challenger. The front chin spoiler is similar in style andfunction as the rear spoiler but is molded into the custom frontbumper cover. The fog lights have been relocated to the center of the enlarged lower front grill and the outer fog light recesses smoothed over. This is an idea I like that comes from the early 70’sCudas. The upper front grill will look similar to the factory grillbut will have a custom waterjet mesh designed specifically for theroadster. Mounted to the grill will be a machined SRT emblem. The upper recessed area around the headlights and grill are painted satinblack.

I knew right away that this concept needed to have a shaker hood that would have to be functional. We’d like to keep the overall look of the shaker close to the shape of the original one from the 70’sbut maybe it could be carbon fiber. This is just one of the many details we are still finalizing. 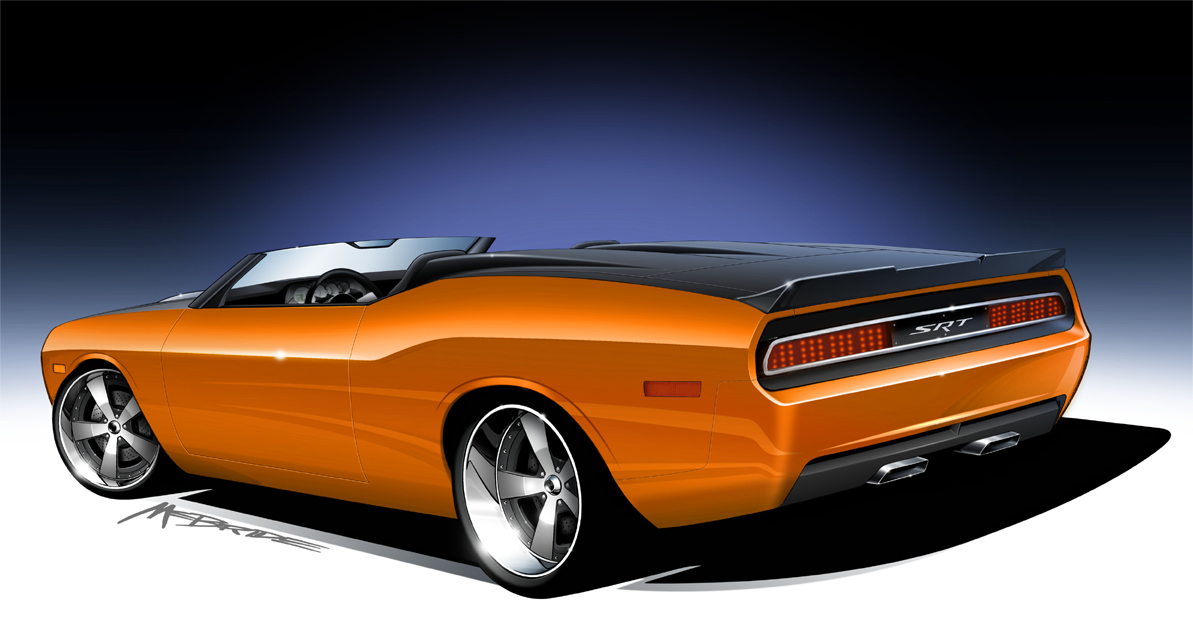 Therear duck tail spoiler is a slightly modified factory style spoiler.The ends of the spoiler have been raised about an inch and the center of the spoiler has a notched look. These rear spoilers adds a littlemore down force and style that mimics the front chin spoiler.

The custom rear bumper cover has been modified with a lower rear diffuser and custom center exiting exhaust. The diffuser styling is clean and painted satin black to visually break up the height of the rear bumper. To keep the rear bumper clean, there would be a hideaway rear license plate that folds under the car once the ignition is turnedoff. This adds a neat hot rod touch to the roadster and also keepswith the clean styling theme. The rear taillights would be modified with LEDs and the center tail light panel will be a custom panel withthe SRT logo machined into it. Like the front fascia, the recessedarea around the lighting is also painted satin black.

Thegloss metallic orange and satin black 2 tone paint scheme was what Iwanted for this concept from the beginning. Vitamin C Orange is oneof my favorite classic Dodge paint colors and I thought it’d beperfect for the roadster but in a trick candy orange hue that wouldreally add a modern custom touch. The blacked out hood treatment painted on Mopars of the past was applied to roadster but continuedall the way to the back spoiler. Satin black painted treatments arealso applied to the front chin spoiler top surface, headlight recess,tail light recess, and lower rear diffuser which really gives this roadster a very aggressive muscular look. 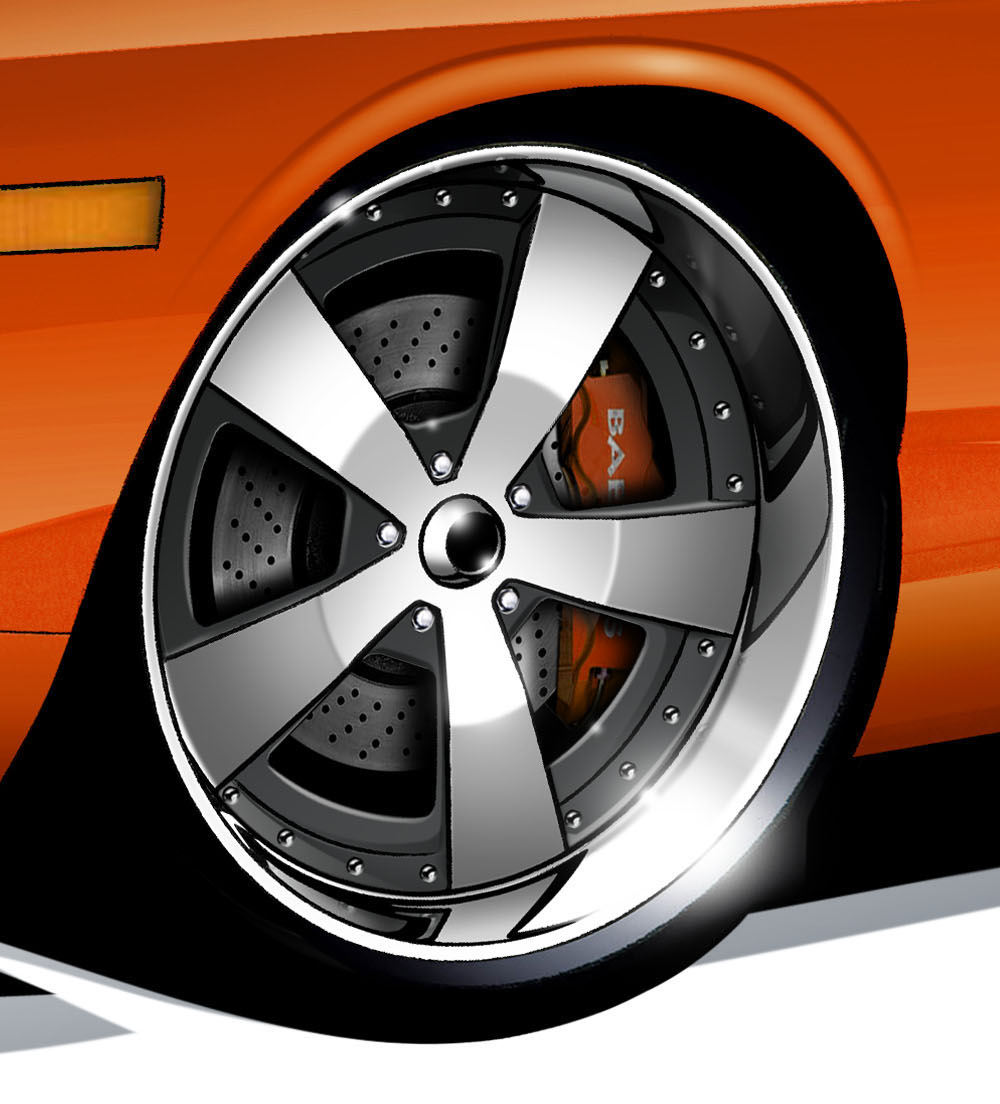 My most favorite detail of the roadster has to be the custom one-off designed billet wheels. The size hasn’t been determined yet but most likely they will be 22” in diameter with staggered widthsfront to rear. To achieve the super wide deep-dish rear wheel, we arethinking of putting in a custom rear axle and mini-tub the rear wheelwells. The wheels are styled to be a modern re-interpretation of aDodge Magnum wheel. The machined-finished spokes are a little chunkier and flare out towards the polished fat wheel lip. The satinblack painted recesses between the spokes are deep and not totally open. Some of this area between the spokes is solid with smallopenings similar to a Magnum wheel. The openings are large enough tolet in cool air as well as show off the large rotors and calipers.The machined bolts are am added touch between the spokes to give the wheel a tough, modern 3-piece wheel appearance. 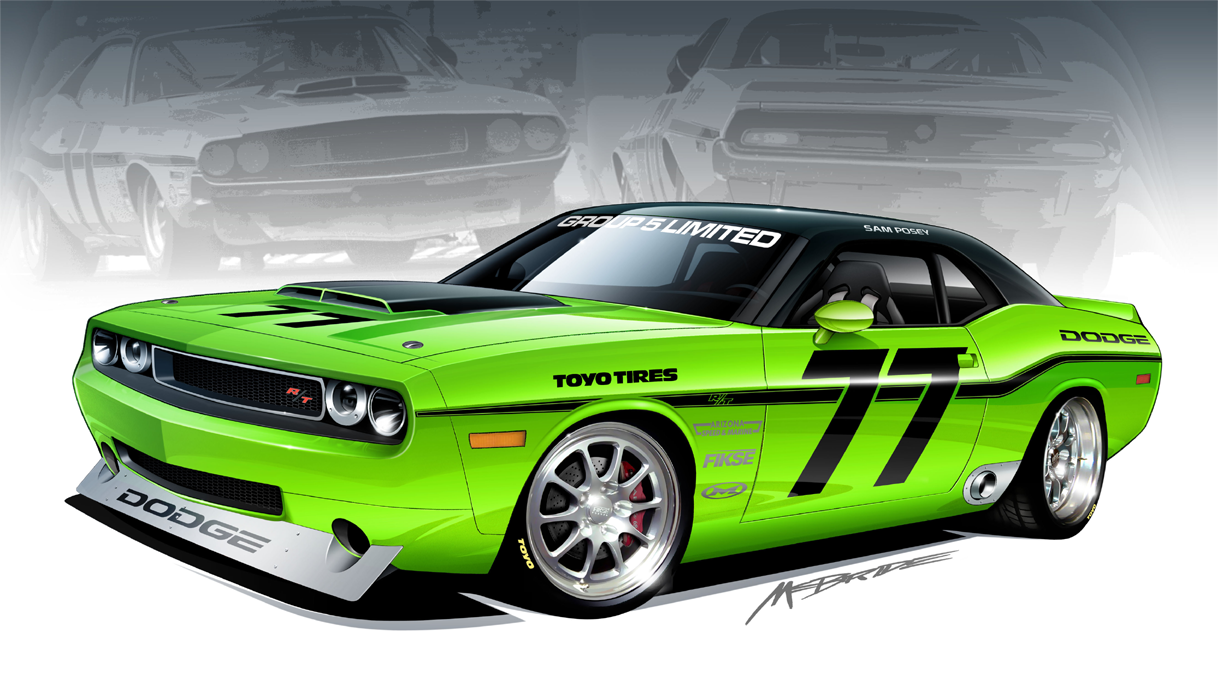 The Posey Challenger Concept is an all-purpose 2008 Challenger race carthat you can drive on the track or the street. Many of the custom body parts and paint scheme from the vintage T/A car are applied tothis concept to pay tribute to this legendary Mopar.

The paint scheme is very close to the original but updated with modernday sponsor graphics and a custom candy green version of the old school Sublime Green which I like to call Psycho-Sublime Green. The top of the T/A style hood scoop is painted gloss black as well as theroof. The #77 and side R/T stripes are faithfully recreated to lookas close to the original graphics as possible.

Thefront bumper is a G5/S front bumper with a G5/R competition frontaluminum chin spoiler. A “DODGE” graphic is added justlike the vintage T/A racer. The fog lights have been deleted and coolair ducts have are to be added to route cool air to the front brakes.

Thecomposite hood and T/A hood scoop continue the Posey Challenger racecar theme and also rams cool air into the engine as well as shaves acouple pounds off the front of the car. Hood pins complete the racinglook of the hood.

Theside exit exhaust is routed out the lower sides of the body to allowmore ground clearance and achieve a modern Trans Am functionality andlook. A stainless heat shield is also added to the body around theside exiting exhaust. 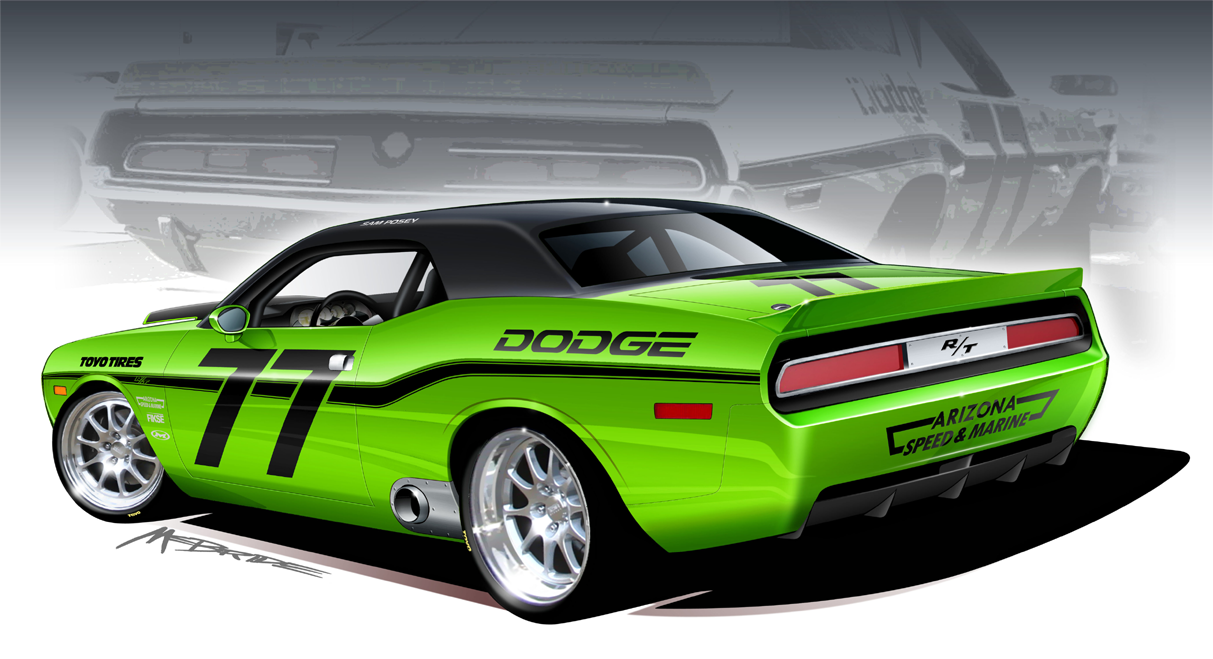 Therear spoiler is a taller custom version of the G5/S spoiler. Thecenter notch has been filled in to essentially create a tallerversion of the OEM rear duck tail spoiler.

The rear trunk lid will have a flush mounted fuel cap recess with aracing-style quick fill inlet. This detail is not set in stone yetand isn’t visible in the rendering. Some sort of a racing stylefuel cap or fuel access will be incorporated into this concept. Hoodpins are used to keep the trunk lid shut.

Therear bumper is a G5/R style bumper including a modified one-off lowerrear diffuser also based off of the G5/R diffuser. What’s different about this diffuser is that the exhaust cutouts are deleted since the exhaust exits out the sides on this car.

Roundingout the purpose built competition exterior styling would be nothingless than a set of Fikse wheels. Chosen for this concept are the MachV wheels. Race wheels for a race car.

Theall-purpose function and attitude would carry over into the interioras well. The rear seats, center console, and carpeting would bedeleted. A road racing style full roll cage would be added for racingsafety as well as stiffen up the chassis. The steering wheel would beremovable, competition seats and racing harnesses added, and a fullset of competition gauges would help the driver keep track ofoperations. Custom lightweight door panels deleting power optionsfurther the full function purpose of this T/A concept.

Aracing fuel cell will replace the factory fuel tank for safety andthe battery will be moved to the trunk to help with weight distribution.

The engine will largely remain fairly close to the stock N/A SRT8 Hemi.There’s a possibility of destroking the engine to keep withinthe T/A rules the original Posey Challenger did with a maximumdisplacement of 302 cubic inches. 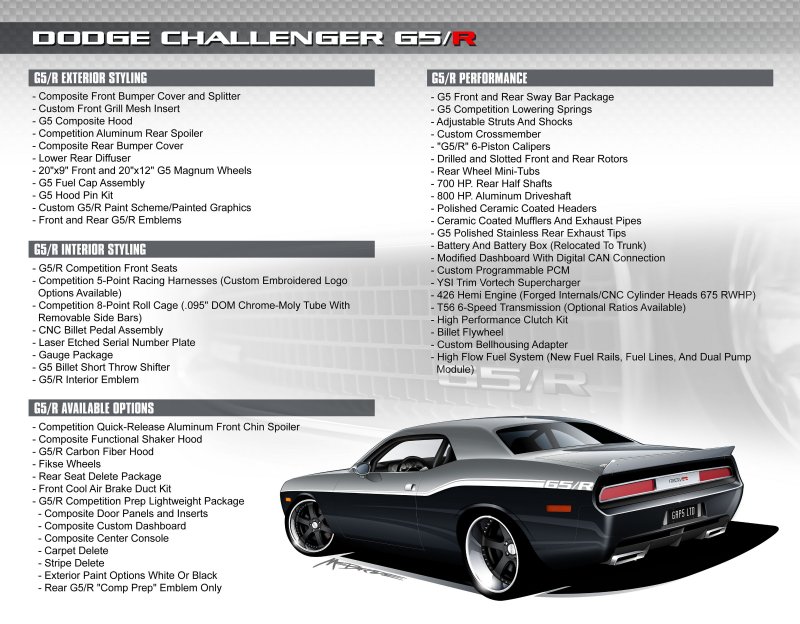 Granny Get Your Gun