Our Mega Series rolls west to Texas for Mopars at the Motorplex. 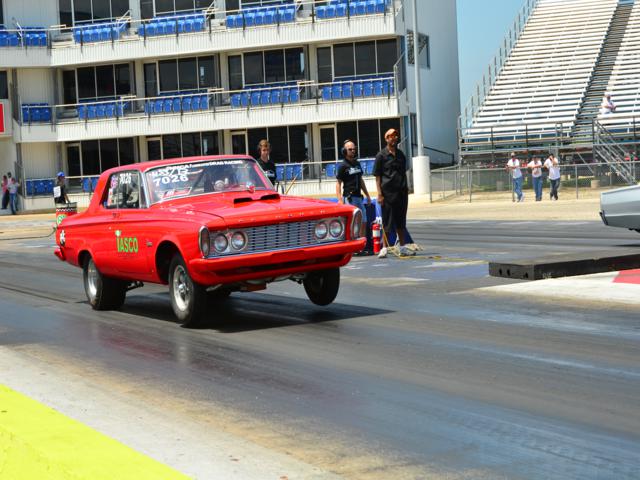 An excellent track surface made for hard launches and low ETs

If you think oil and water dont mix, theres something even even less mixable show cars and water. Yeah, show car owners dont like to get their cars wet, or even damp. We think they all own big humidity monitors to tell if conditions are right to open the garage door, as too-moist air might cause their car to disintegrate into a pile of rust. So it was no surprise that there was no huge line of show cars waiting at the Texas Motorsports gate for the Mega Mopar Action Mopars at the Motorplex show. Shame, because the short early drizzle soon gave way to great weather, so the Mofans who looked out the window and chose not to turn over and pull the covers back over their heads missed a great event with cool show cars and hard racing.

The weather notwithstanding, the turnout wasnt bad at all. Motorplex general manager, Gabrielle Stevenson noted that while the track also hosts Ford and Chevy events, the Mopar crowd shows a level of passion and enthusiasm that surpasses the Blue Oval and Bow-Tie crowd.

Trackside, racers who dont worry about getting those horrid water spots on their paint, turned out in force and waited patiently for the skies to clear and the track to dry. From the reactions we saw,the clock-runners were happy campers. The Motorplex crew stayed on top of track conditions laying down and maintaining a great traction surface.

Much credit for the shows success goes to the Cowtown Mopar Club who helped promote the event and handled the show car judging. Cowtowns been involved with the Mopar event for three yearsthe last two of which have been under the Mega Mopar Action Series umbrellajust the ticket to protect your show car from the damp 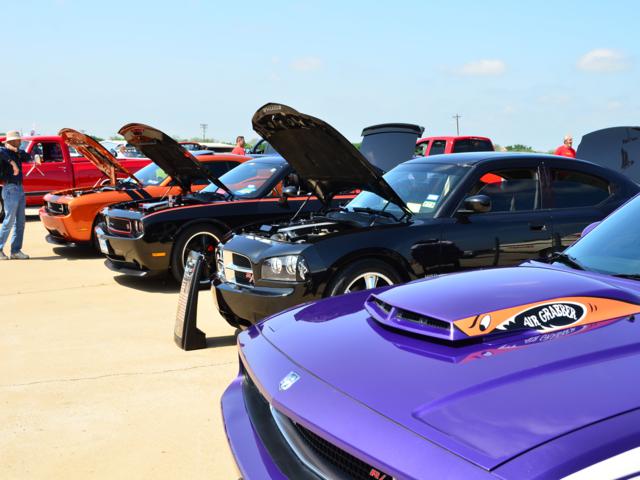 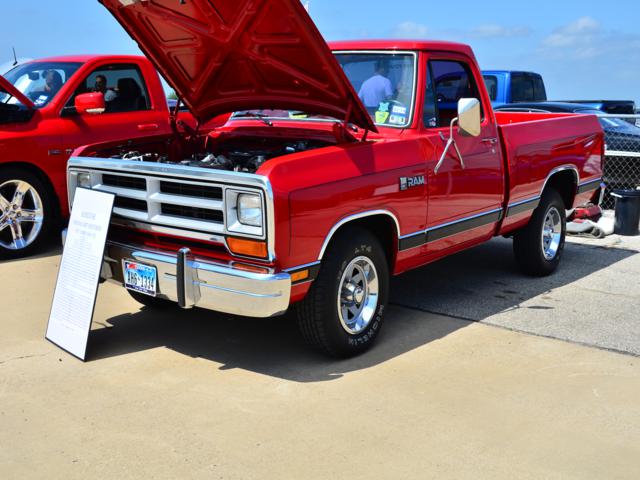 Jerry Reed took Best Survivor/Unrestored with his 87 Ram 150 SWB. The truck, with 125K miles, was bought new by Jerrys Uncle Jim whos also going strong at 95. The truck still bears all of its factory markings on the chassis and under the hood 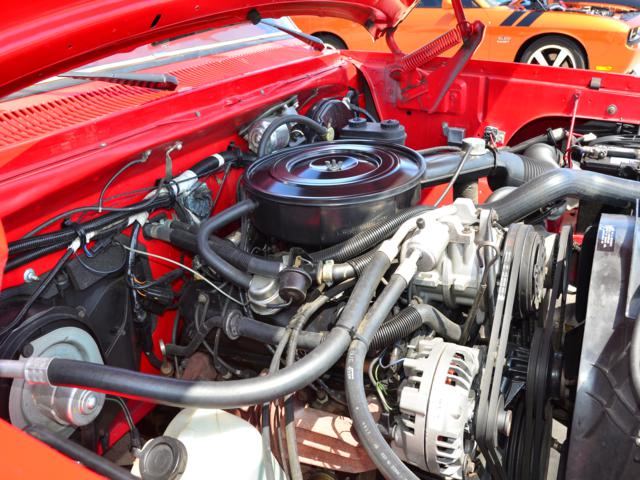 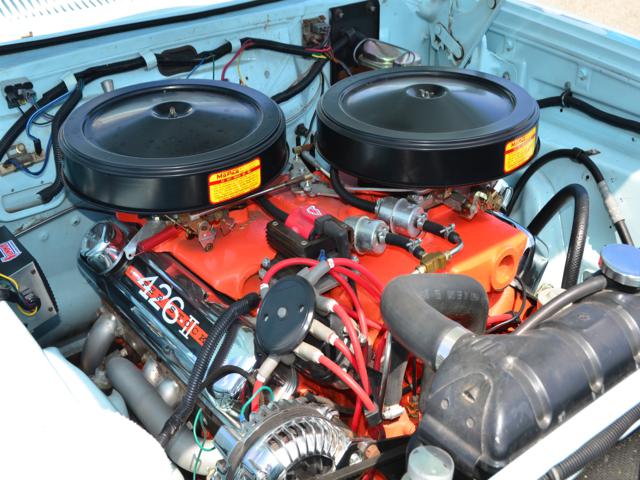 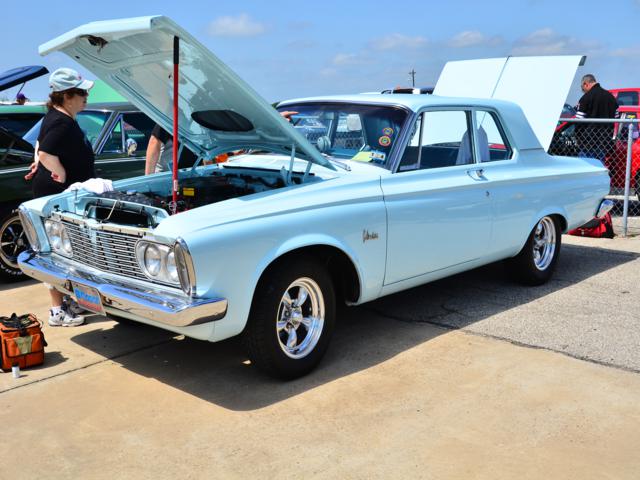 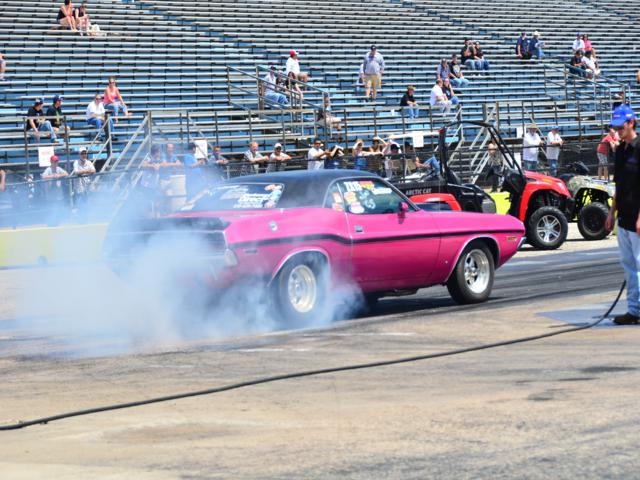 The Challenger shootout is a series thats gaining in popularity. Its great to see the classics pitted against the late models.The winner was Silvia Zemgals in a 70 Panther Pink model turning 11.83 (on an 11.82 dial-in) @ 109.36 MPH. Classic muscle rules! 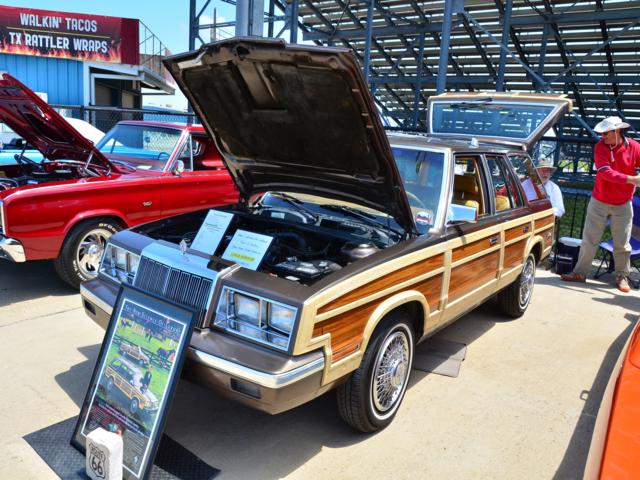 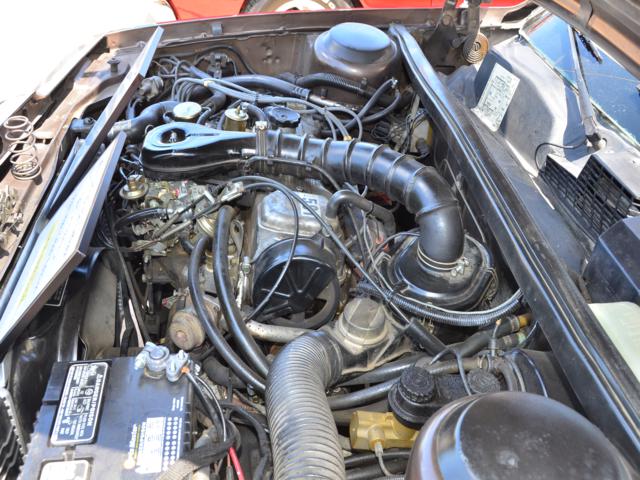 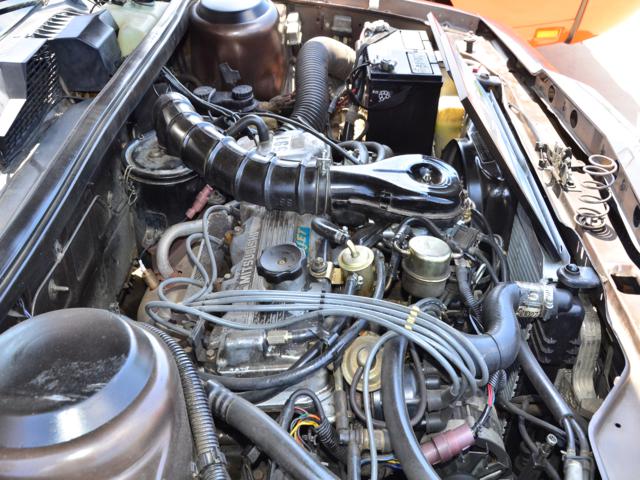 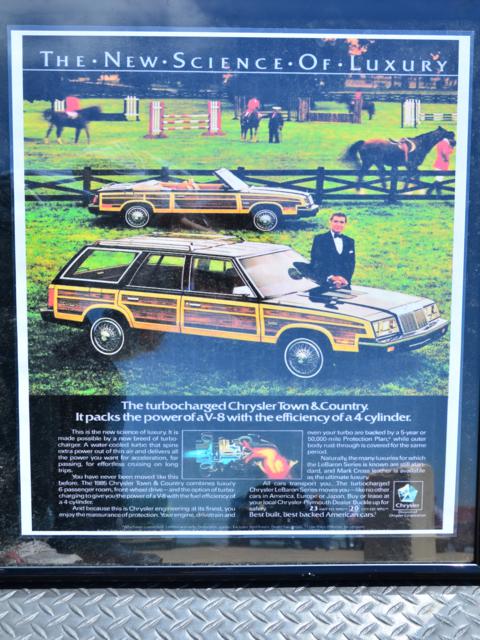 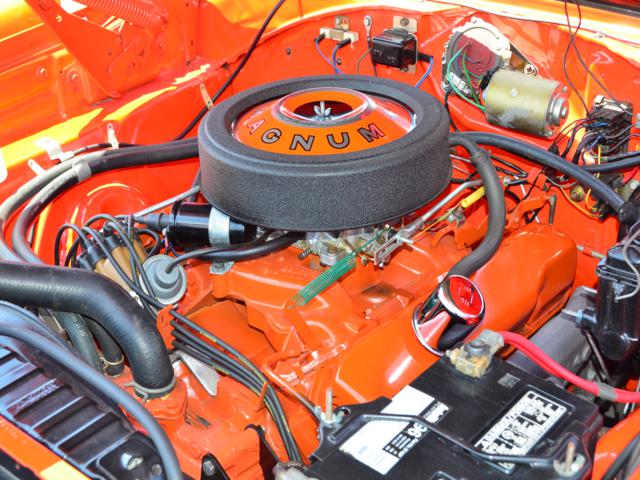 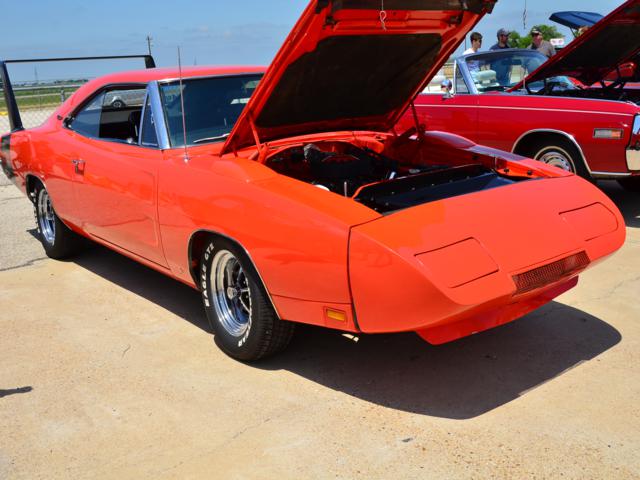 Cowtown Mopars did a stellar job in show car judging. Dave Mandata is seen here checking for flyspecks or something.
Daves 66 Charger won Best of Show but Dave didnt judge his own car. The event attracted a young crowd. 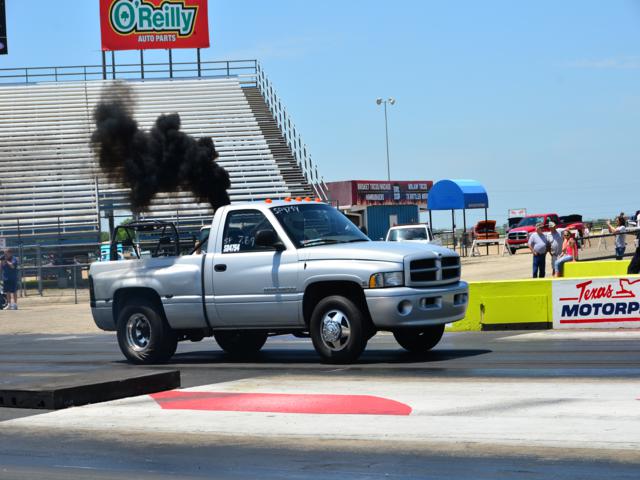 The mindblower of the event was this totally stock-appearing Dodge Ram 3500 diesel dually that ran in the elevens!
Forget Hemigimme a Cummins. 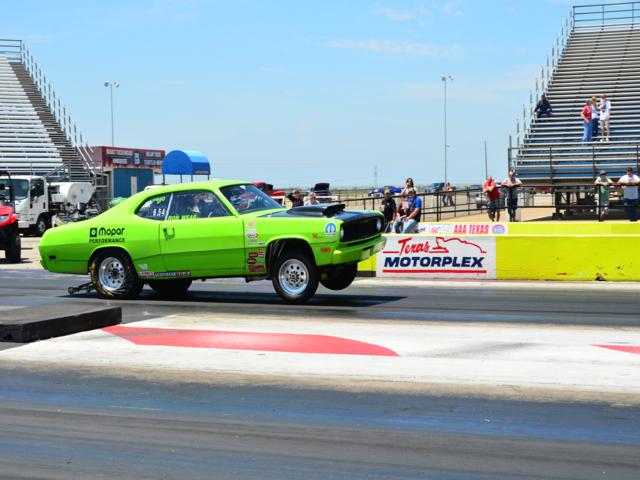 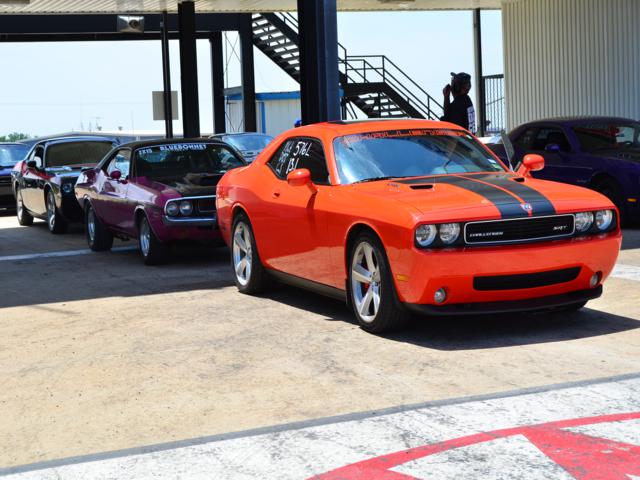 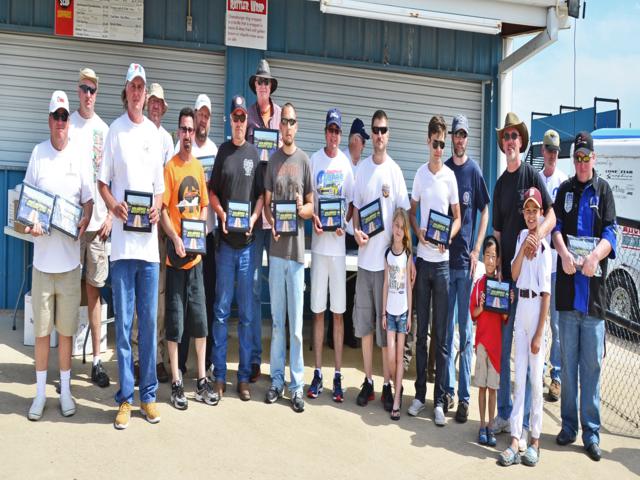 The show car winners line up with their plaquessure to be handed down through generations as family heirlooms.
Or sold on eBay. 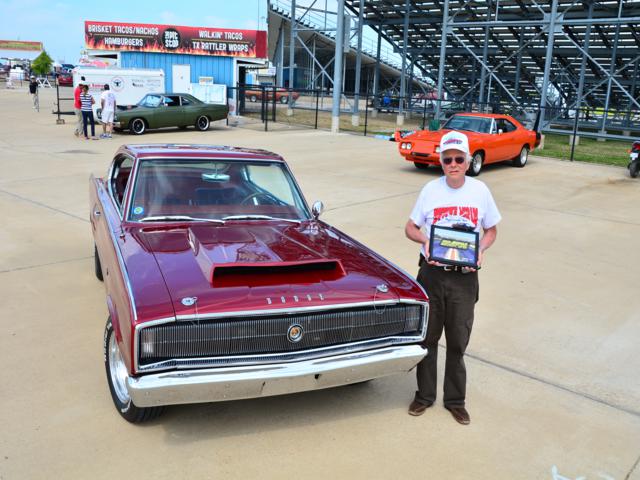 Dave found the car on the Internet almost 9 years ago. He always wanted a 66 Charger since they first came out, but serving in the Navy, he couldnt afford one. When he got the itch for a classic car, the Charger was his choice.

The Charger came with a rebuilt 361 which was OK. But when Dave joined the Cowtown Mopar Club, he said everyone had a 440, so he wanted one. He found his big-block in a 66 or 67 Imperial. He bought the car, pulled the engine and then gave Impy back to the seller. Dave had the 440 rebuilt by noted Mopar engine expert Les Adams. Les installed an Edelbrock 750 on a Weiand manifold and warmed up the cam a bit. He runs a 2? exhaust (no headers) through 2-stage Flowmasters. He says its loud as hell, but he loves it. He upped the brakes with front discs from a 71 Satellite. They bolt right in.

Dave searched eBay for trim pieces that were better than what came on his charger, and he had everything rechromed. The interior was totally redone by an upholstery shop that went out of business a month after they completed the job. Mustve lost their shirt on the deal, cause Dave still has his.