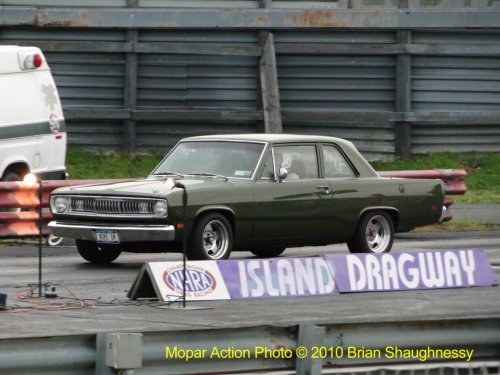 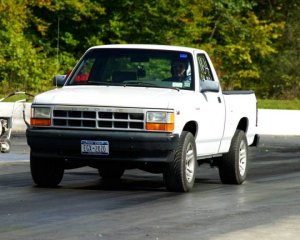 Everyone is invited – the only requirement is that your car be muffled and be safe to drive. You can trailer it there, but I’d like to see mainly street-driven cars. The track is usually uncrowded on Friday evenings, so you can make plenty of runs. Road Runner or Viper, Neon or Duster – whatever. Bring it, shoot the bull with yours truly, etc. Cheap, no pressure, no hassles, non-judgmental  just fun. Car not ready? Just come and hang out. Gates open about 5:30PM, first pass at just after 6. Easy to reach from anywhere in northern or central NJ, Eastern PA, or NYC and the ‘burbs.

For the first event, Ehrenberg brought the famous Green Brick. A good time was had by all, lots of bench racing and all the runs you wanted…the Brick made 8, despite a cooling fan failure which meant that runs were made with a coolant temp of 240 degrees! The best part was that we won 6 of the 8, losing only to other Mopars, and frying considerable rice and 2 Mustangs. Fun!

On June 18th, the turnout was even better. Bench racing was going on as they were locking the gates! Our ScatDak, a blistering 14-second “beast”, even put away a bunch of sushi s**t, etc.

I’ll bring some Mopar Action tees for low ETs or whatever. And always at least one of the M.A. project cars (or the Dak). On the first night, low ET (in a Mopar or otherwise) was kind of a ringer – Melissa, part of the track management family, wheeled out her personal big-block Mopar powered econo dragster, which ran 7’s, but was hardly a McD cruise-in vehicle! 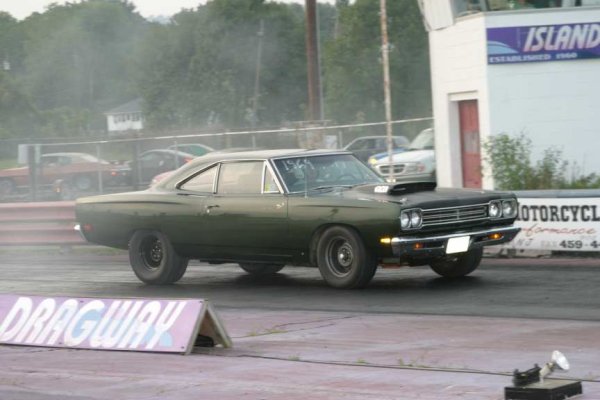