Hey, Come to our party!

Its the event youve been waiting for!

So what are we gonna offer? For starters, we have our beloved tech editor Rick Ehrenberga Mopar Action @ The Grove exclusive! Rick will be there to answer all your tech questionsin person! Try and stump him with questions like, what is the third most populous city in Zimbabwe, or, how many troops were involved at the Battle of Bunker Hill?

And if Ehrenberg isnt enough (he thinks hes more than enough) were also gonna have Herb McCandless giving a Mopar Performance seminar. Between the two of these guys, if you cant get your Mopar to go fast, you might as well move down to a Yugo or a Chevy.

Want more? (We were afraid you would) so heres more: Drag racing up the yazoo (and down the track, too). Heres how the classes are shaping up:

Hemi Challenge for SS/AH cars, so far we have a $10k purse for the eliminator.

Non-Electronics Class for those without electronics (exception: you can talk on your i-phone while running this class)

Want to gander at shiny cars parked on the grass? Check out the big judged car show and see if you fit into one of the following classes: A-body, restored/mod. B-body restored/mod. E-body restored/mod. All other Mopar passenger cars restored/mod. Trucks, restored/mod. Radical Customs (all bodies). Youll notice no Benzes or Fiats, please (but Imperials, DeSotos, Fargos, Plymouths, and other Genuine Mopar orphans are welcome). We will also have “Mopar Alley” for street driven entries. They will park in a special area and Big Daddy will don his specs and pick his Top 10 favorites on Saturday and Sunday.

Hard of hearing? Not a problem, we’ve got something for you, too. You won’t need fresh batteries in your hearing aid to appreciate the “Jersey Thunder” jet dragster. You should see the local noise complaints we get from spoilsports near and far when this guy lights it up.

And we haven’t forgot about all you autograph hounds, either. Mope personalities include Big Daddy Don Garlits (he’ll bring his Drag Pak Challenger), Herb McCandless, Rick Ehrenberg (at the kissing booth), Ray Barton and his Hemis and more. Mopar Action’s Special Projects Director, Hemi Fred Ristagno will be bringing his “real and original” 1972 Sox & Martin Pro Stock Duster, plus a big surprise (hint: it’s raaadical!) And at least one of the M.A. project cars will be there.

For all you Mo’fans bringing cash or credit cards, we’ll have a Manufacturer’s Midway, Swapmeet and Car Corral. So come prepared. And, as an added bonus, all attendees will receive a dash plaque, and Class winners all get a jacket and plaque. Sorry, but the potato sack race and chicken wing eating contest have been cancelled as we were informed that they are trademarked by the All Chrysler Nats at Carlisle.

So, be there or be square! (or something like that). 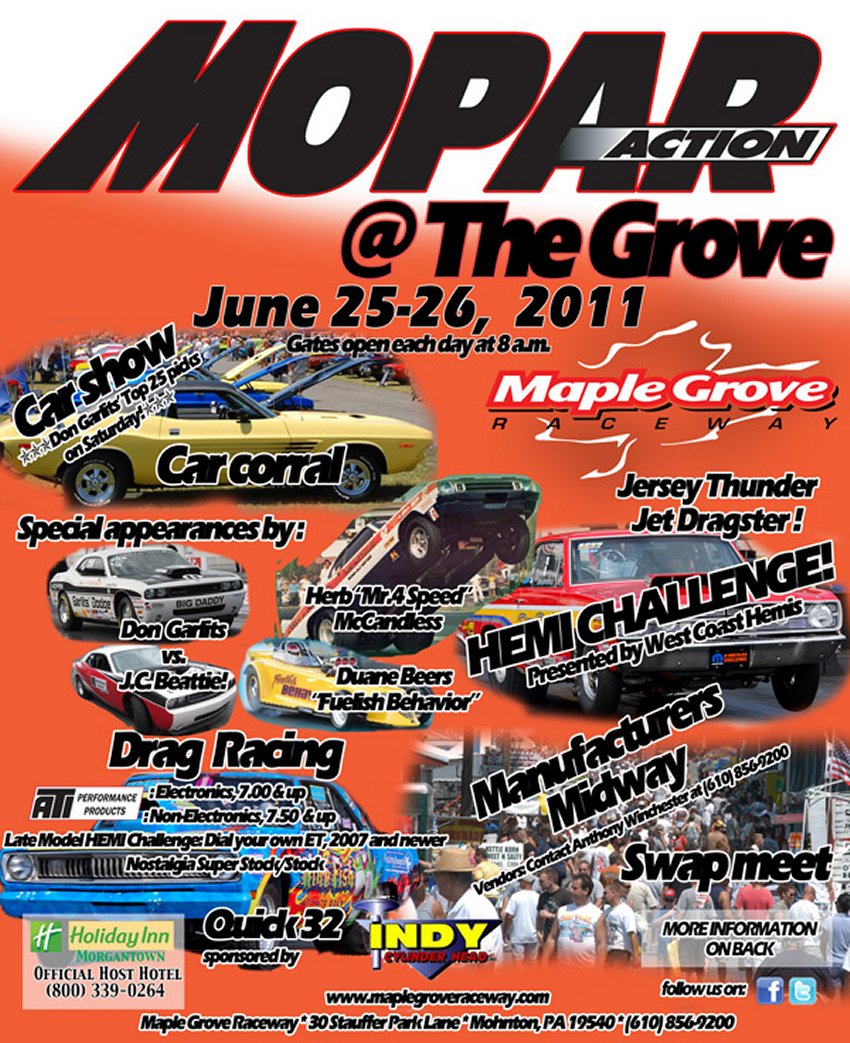 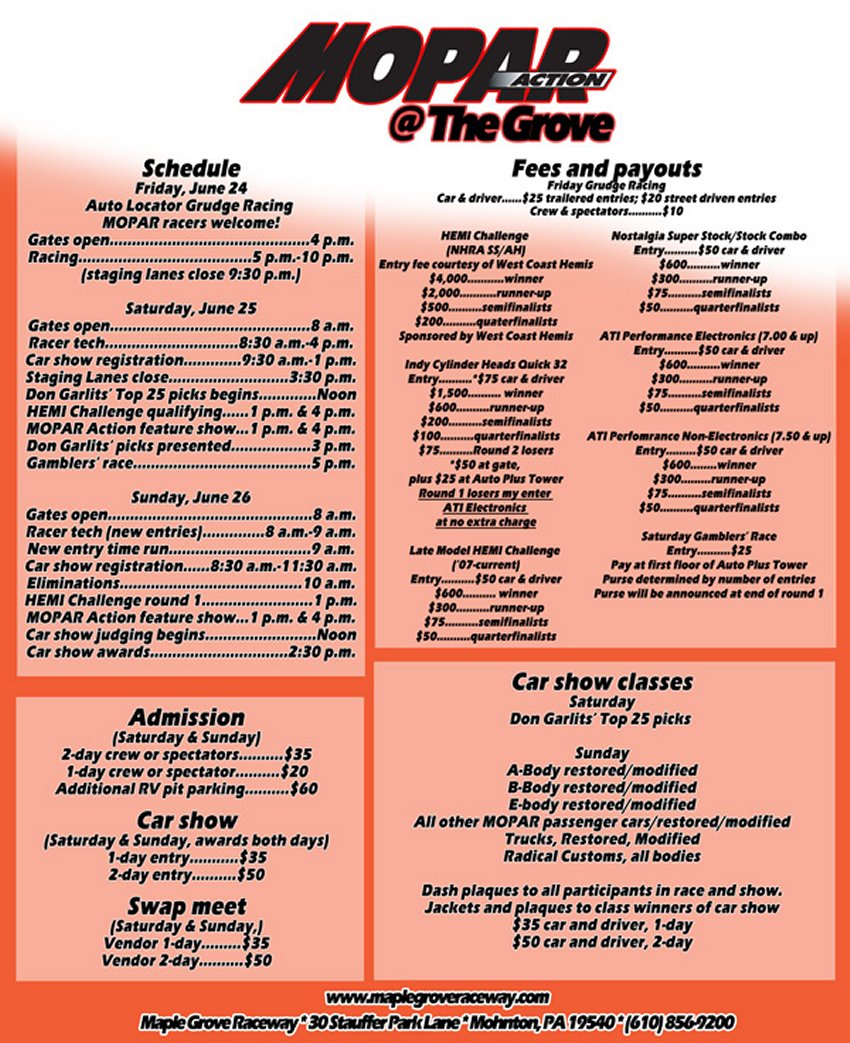 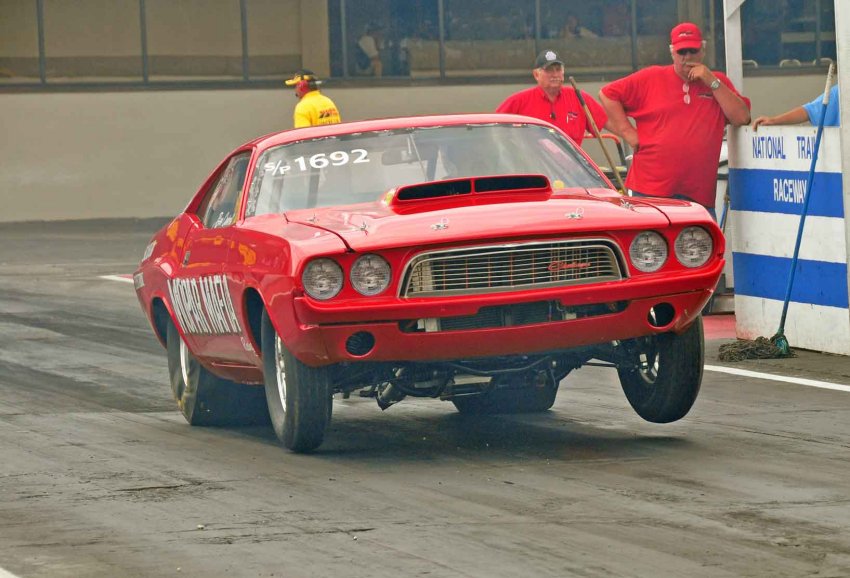 Therell be drag racing galore on The Goves famed quarter-mile. 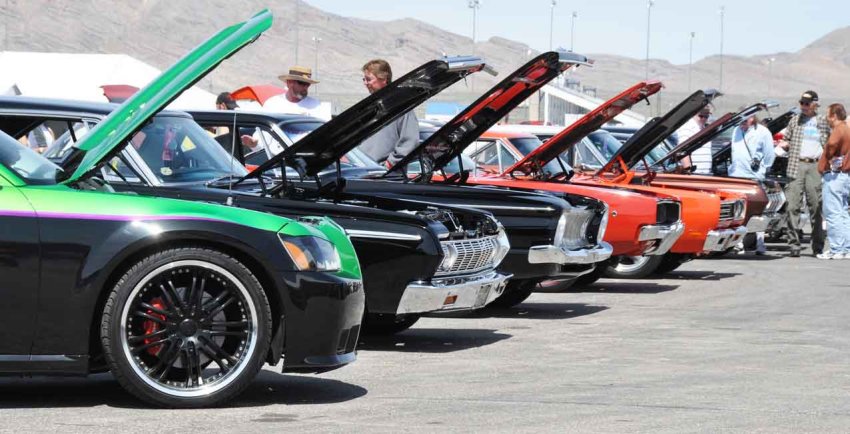 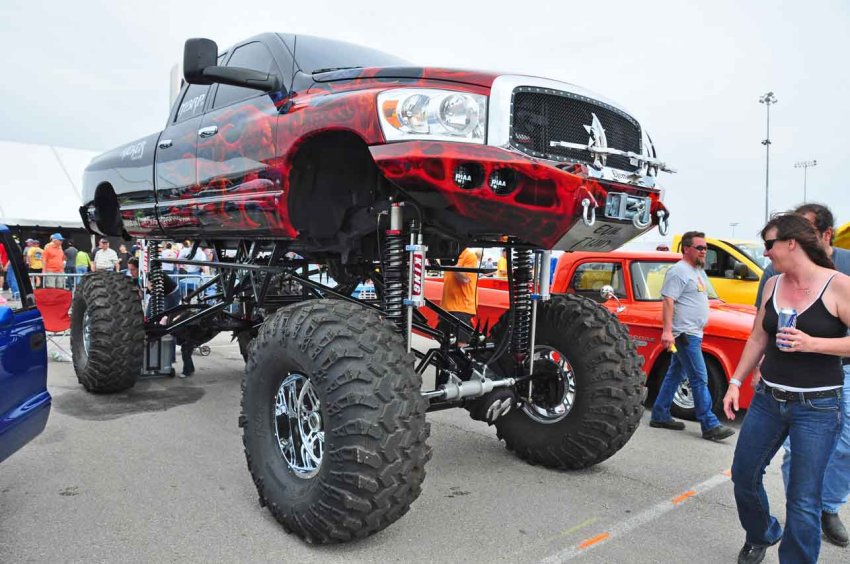 You never know what can pop up in the car show field. 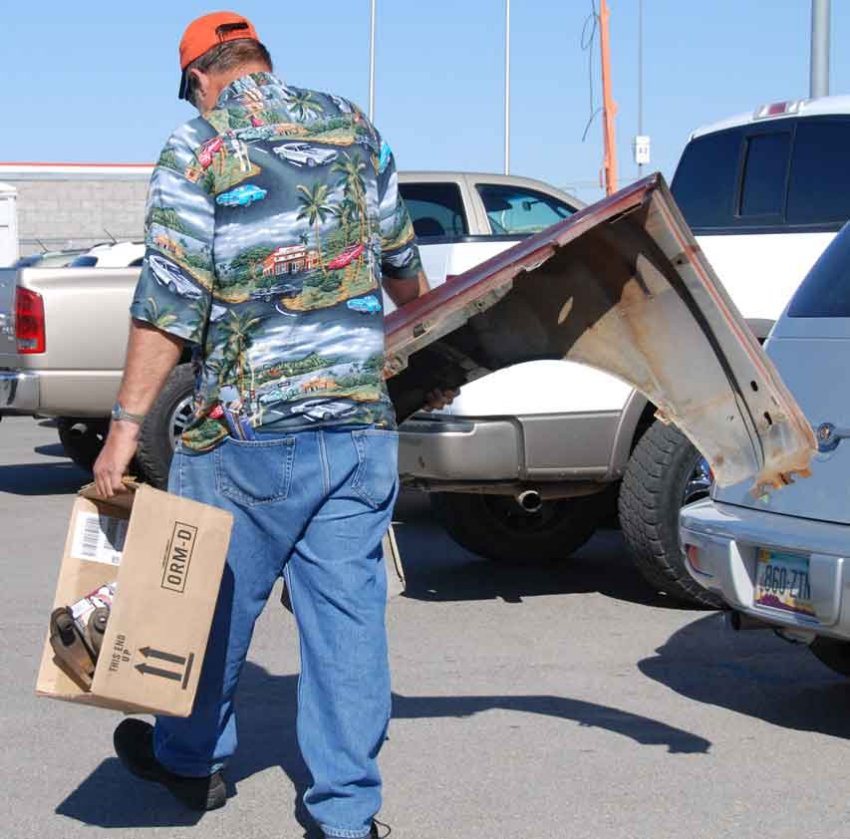 Find the parts you need in our swapmeet (bring your own box). 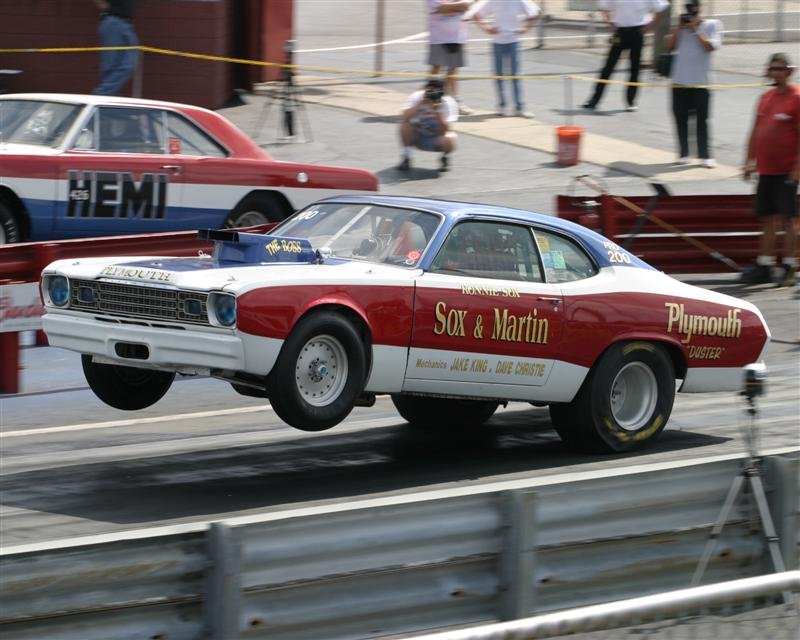 Check out Hemi Freds 72 Sox & Martin Pro Stock Duster.
Its the real deal, and hes not afraid to thrash it. 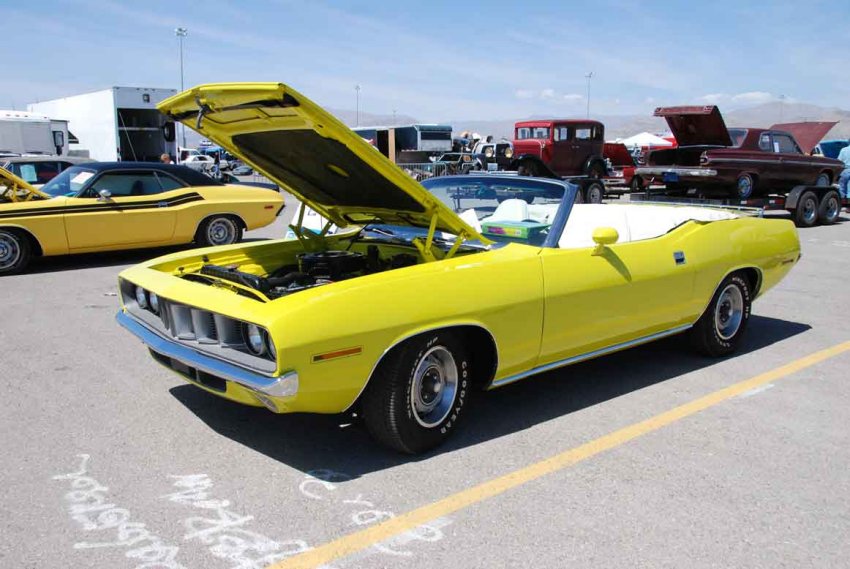 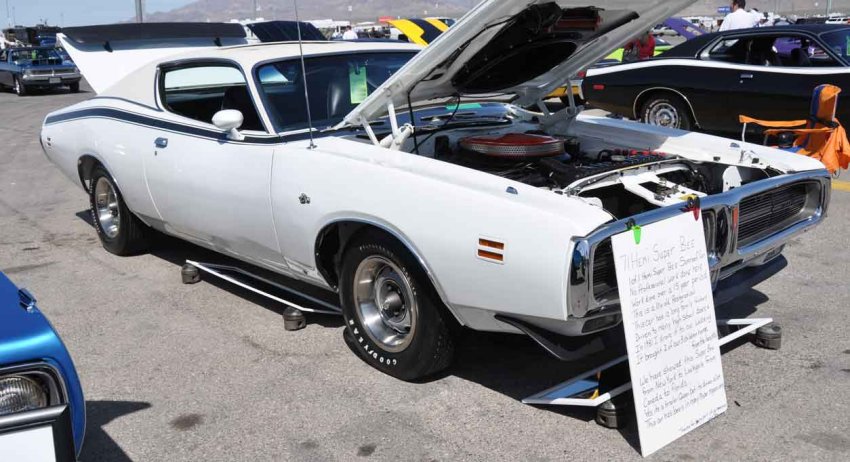 Need a new ride or a good project? Our car corral is the right place to start looking. 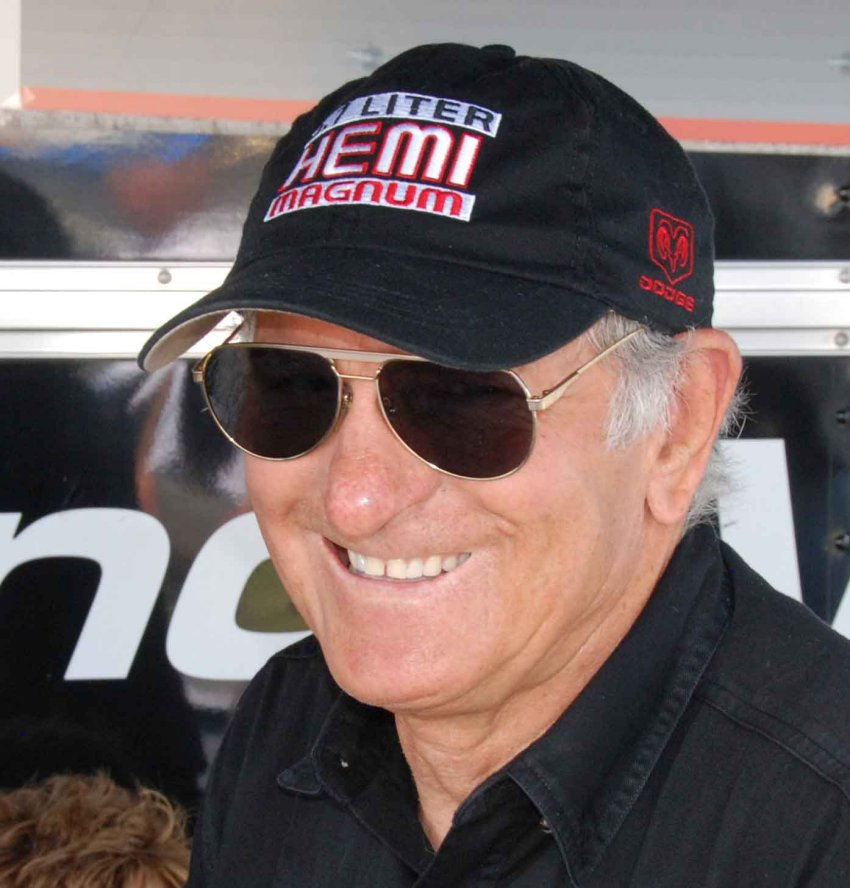 Why is Big Daddy smiling?
Cuz he just cant wait to sign autographs at the Mopar Action @ The Grove. 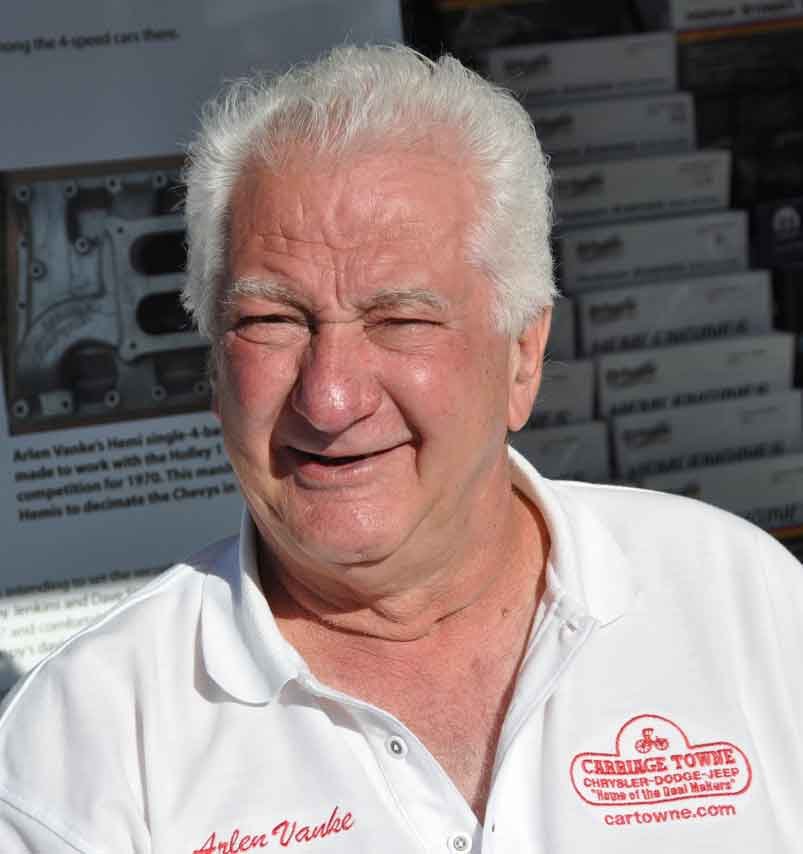 Arlen The Forgotten Hero Vanke will not be attending,
but we are working on getting an Arlen Vanke impersonator to wear one of his shirts and sign his autograph.