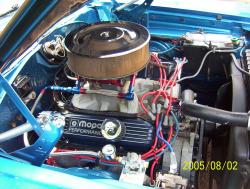 Before the mill went in, Bryan had a lot of resto work to do. New metal included floors, front and back, both fenders and the hood. The new steel hood eventually had to be replaced with a fiberglass unit because of carb clearance. Chassis work saw the front frame rails replaced, and the rear ones repaired. The rear 3.23 cogs were swapped for 3.91s. When Bryan got the car, it had been partially parted out and restored with 68 Charger seats. Those were replaced with 94 Eagle Talon buckets. Originally orange, Bran repainted the car blue to match his 99 Ram. Bryan tells us that his best time at the track is mid-11s at 117 MPH.